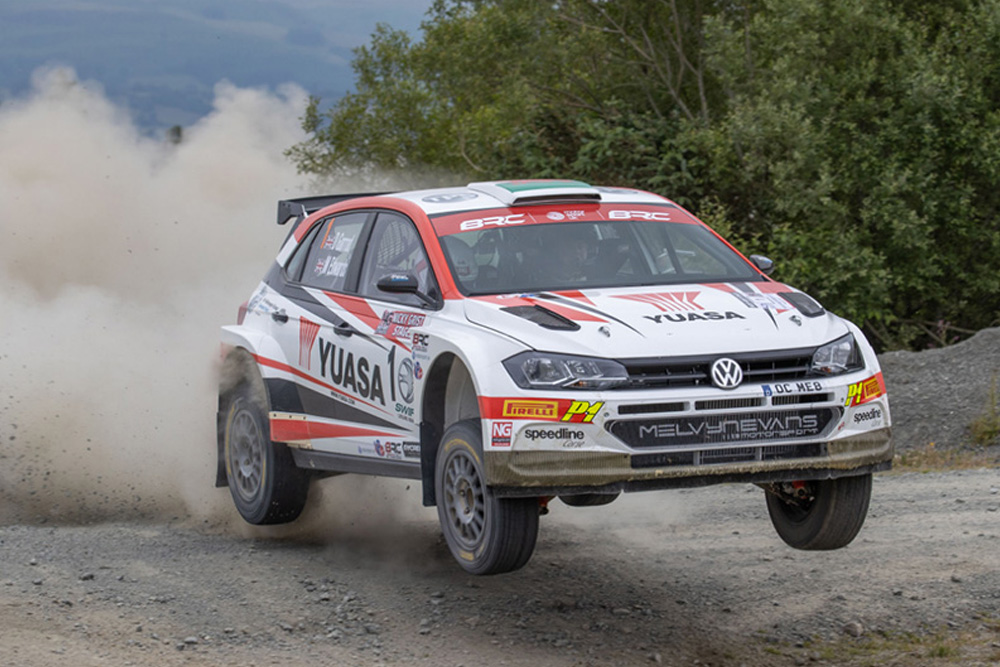 Matt Edwards has taken the lead in the British Rally Championship after winning the Nicky Grist Stages in sensational style in his Yuasa Rally Team Volkswagen Polo GTI R5.

The double British rally champion considers this to be his best performance on gravel to date, given the intensity of competition and a new car for 2021. It is also the first time that a Volkswagen Polo GTI R5 has won a round of the BRC, and it’s first victory on a UK forest rally.

Having been down in fourth place at the end of the opening Llyn Login stage, the 36-year old driver from Colwyn Bay set fastest time on SS2 (Monument 1) to tie for the lead with stablemate Osian Pryce (Polo GTI R5) – and by the end of SS3 (Halfway 1) he was tied for the lead with Tom Cave (Fiesta Rally2).

Co-driven by Darren Garrod, Matt took the lead outright after SS4 (Crychan 1), despite an engine misfire and a problem with the car’s brake bias – both of which were fixed by the Melvyn Evans Motorsport team during the midday service halt.

Matt took a two second advantage into the afternoon’s loop of four stages, and extended his lead to six seconds after a tactical push through SS6 (Monument 2), before another fastest time in SS7 (Halfway 2) saw him go into the final stage ahead by seven seconds.

Matt had used his Pirelli tyres well in the hot, dry and abrasive conditions, and managed his run through the closing Crychan 2 stage – which admittedly included a few big slides as the grip levels faded – to clinch victory by five seconds in the Yuasa, TPS and Swift Group-backed Polo GTI R5.

“It’s great to win the Nicky Grist Stages and be back leading the British Rally Championship,” said Matt.

“I have to give full credit to the Melvyn Evans Motorsport team. I had a lot of confidence with the Polo GTI on gravel from the first few runs I did with it on the pre-event test, and that has carried through to the event itself. We have a little more to do set-up wise to get a bit more out of it, but it’s a great position to be in early in the championship – leading it in a brand new car.

“Winning the Nicky Grist Stages was never going to be easy, and it wasn’t!

“We also had an engine misfire and the brake bias went for two stages, but we manage to fix both those issues and can look back and see that we were competitive from start to finish.

“I think the second stage after service, the second run through Monument, was key. We pushed hard and took a lot of life out of the tyres, especially on the downhill braking points, but we won that stage by four seconds. We had to manage the tyres for the final two stages after that. At times it was a bit of a handful, but we controlled the pace with five seconds to spare.

“When I look back at the event, I feel that this was my best performance on gravel to date, given the intensity of competition and the Polo GTI being a new car for 2021. And that gives me a lot of confidence heading into the next round of the BRC.”

And the next round of the British Rally Championship is the Grampian Forest Rally in Scotland on Saturday 14 August.

British Rally Championship for Drivers’ – points after Round 2