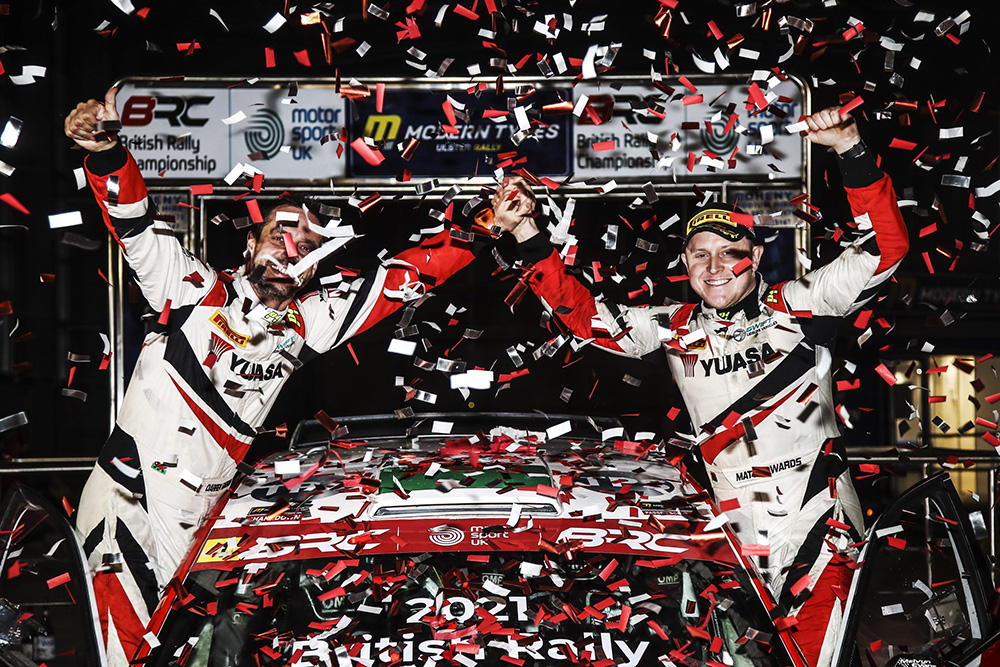 Matt Edwards has won the British Rally Championship drivers’ title for a record-breaking third time in a row after taking his Yuasa Rally Team Volkswagen Polo GTI R5 to a sensational victory on the Modern Tyres Ulster Rally (Saturday 20 November).

Overnight and midday rain made the fast and bumpy closed country lanes of County Down extremely slippery, yet Matt never put a scratch on the car as he won the 94-stage mile event by over two and a half minutes!

Whilst Matt writes his name into the BRC record books, Darren Garrod wins the co-drivers title for a second time, having also guided Matt to his first title in 2018.
The Ulster Rally saw an incredible fight between Matt and his Melvyn Evans Motorsport stablemate and BRC title rival Osian Pryce.
Taking Pirelli slick tyres, Matt blasted through the opening damp loop to lead by 7.4 seconds at first service in Newry.

A heavy shower of rain after the second loop had started forced a more cautious approach, with Matt losing the lead after SS5 – only to regain it after a stunning drive through SS6 gave him an 8.3 second advantage.

For the final loop Matt went out on Pirelli wets and extended his lead to 9.1 seconds after the third and final pass of the 8.98-mile McGaffin’s Corner test (SS7).
The final run over the longest 13.47-mile Bronte Homeland stage (SS8) was always going to be significant and anticipating a big attack Matt drove a faultless stage to set the fastest time.

It wasn’t until he’d completed the penultimate stage did Matt discover that Osian had crashed mid-way through the test.
Matt still had to finish the event and score maximum BRC points to secure the title and a cool drive through the final 8.81-mile Shinn Bridge stage brought him his third BRC drivers’ crown. 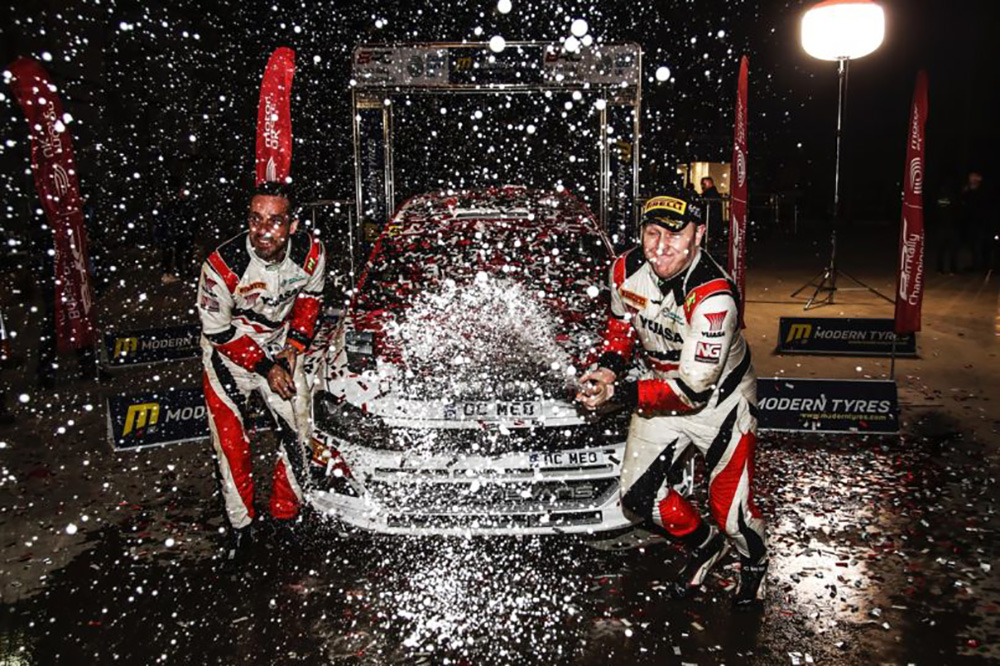 “My mindset for the Ulster Rally was simple – just go as fast as we can on every stage and try to win. Nothing less would have given us the title,” said Matt.
“I knew that the stage that Osian went off on was probably make or break for him. He had to do something special in there and my goal on the penultimate stage was to not give him any opportunity to take a big chunk of time off me.

“The conditions were very tricky and we obviously didn’t know at the time that he’d unfortunately gone off as we were first on the road, but we really nailed the stage that time – really clean, tidy, fast and committed. I felt sure we’d done enough before the news come through.

“The title wasn’t won yet of course as we still had to finish the event and score maximum BRC points, and there was just massive relief inside the car when we crossed the finish line of the last stage!

“To win three British rally tiles in a row is very special, but what makes it even more special for me is that it’s been in the making for two years.

“Because of Covid we’ve had to work hard to ensure everyone remained engaged with the programme and to make sure the opportunity to win the British title three times in a row was still on when competition was allowed to restart.

“It hasn’t been an easy two years. Performance-wise I’ve had to keep on top of my game even when there haven’t been any rallies to do. I’ve also had to make sure the sponsors stayed engaged, I had to find a new car, I had to find a team to run it – all the things you do behind the scenes, I’ve had to maintain that level of focus, ambition and motivation in myself and in others for two years.

“But everyone has remained extremely loyal and stayed with the programme and it’s all thanks to Yuasa, TPS, Swift, Speedline Wheels, Nicky Grist Motorsport and Melvyn Evans Motorsport for making this year such a huge success.

“So many people had faith in me and together we went out and achieved British Rally Championship history.

“It hasn’t all been plain sailing this year. I made a mistake on Mull, which could have written off our title challenge, and our issue on the Cambrian could have certainly ended it.

“It’s too easy to park the car up when something goes wrong, but when you have so many people involved behind the scenes you have to think of the incredible effort that they’ve all put in too. I’m the guy they’ve entrusted to deliver on their investment and it’s a big responsibility. I never give up and those points scored finishing Mull and the Cambrian turned out to be crucial, as we knew they would.

“After the Cambrian I knew that I had to retake control of the situation. We’d had problems, some of our own making, and enough was enough. I was in such a good place physically and mentally going into the final round in Ulster that there was never any doubt in my mind that we’d be British champions again. It didn’t happen exactly how I’d dreamt it, but it happened!

“Despite the very tricky conditions on the Ulster Rally, we’ve pushed hard and won without putting a scratch on the car – which is back to normal in that respect, because I absolutely hate damaging a rally car!

“We’ve had the pace all year. A few things haven’t gone as planned, but we always believed winning the British title would happen.

“Everyone knows how much the British Rally Championship means to me and I’m very proud to have won the title three times in a row.”