Matt Edwards produced one of the most extraordinary comebacks in the history of the British Rally Championship when he fought back from 143rd overall and last of the BRC competitors to finish fifth overall and score second place BRC points on the Beatson’s Building Supplies Mull Rally (8-10 October) in his Yuasa Rally Team Volkswagen Polo GTI R5.

His first appearance on the famous asphalt event, held on the Isle of Mull in the Scottish Inner Hebrides, didn’t start well, as he uncharacteristically approached a tightening left hand corner near the start of SS1 too fast.

Matt pulled the handbrake so the Yuasa Battery, TPS and Swift Group-backed Polo R5 would hit the bank backwards and not damage the radiator or anything around the engine at the front of the car. Instead the heavy impact broke the rear right suspension.

He and co-driver Darren Garrod found a safe place to pull over and assess the damage and tied the broken suspension together using the spare wheel strap. Unfortunately, the brake disc had snapped and they had to complete the 6.77 mile Mishnish Lochs stage at slow speed – collecting a stage maximum time of 14 minutes and losing almost seven minutes to the fastest BRC crew.

From there the route went straight into SS2, forcing Matt to limp through the 14.51 mile Hill Road/Loch Tuath test as well, costing another six and a half minutes. 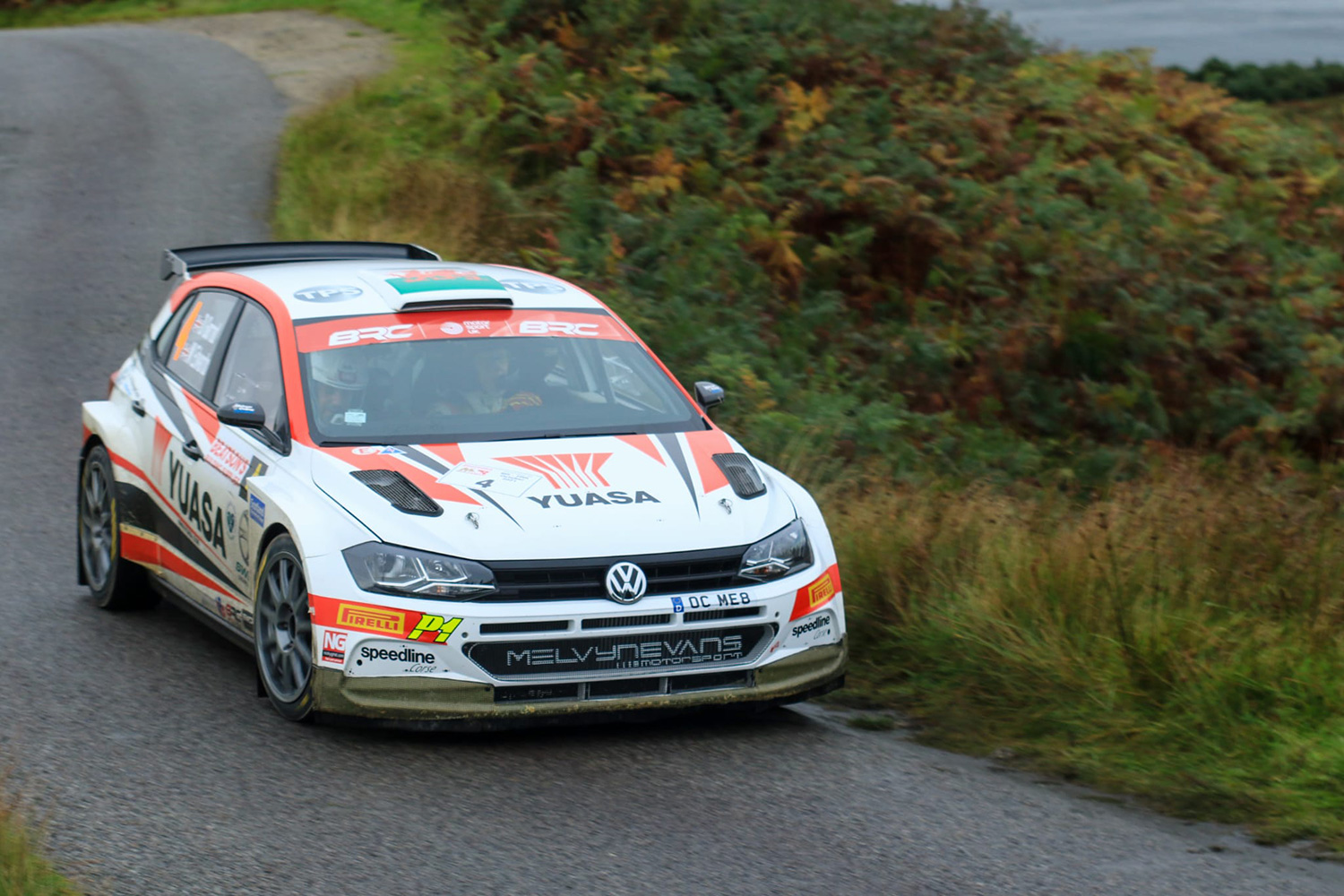 The Melvyn Evans Motorsport team were impressed that the 37-year-old Colwyn Bay driver had managed to make such an ingenious emergency repair and get the car back to first service, which was situated next to the ferry terminal in the village of Craignure. The BRC Teams’ trophy leading squad repaired the damage in the allotted 45 minute service and with new suspension and brakes the car headed back out.

Matt had lost almost 14 minutes in total, but with 15 stages and 127 stage miles remaining all was not lost and the fightback for BRC points was on.

Matt responded in the only way he knows how – by setting fastest BRC time on Friday’s remaining three night stages to move up to 80th overall by the overnight halt.

It’s not in Matt’s nature to feel sorry for himself and he came out fighting on Saturday afternoon at the start of a very tricky Leg 2 by achieving the near impossible and taking time off all the local drivers by setting overall fastest time on the opening two stages.

By the time he arrived in service in Tobermory for a second time Matt had five fastest BRC times and moved from last to sixth – this despite a half spin on SS10, during which he’d clipped a bank and dislodged the front bumper. Another brilliant overall fastest time on SS12 shot him up to fourth in the BRC category. However, he had his sights fixed on second place, even though the deficit to that position was over three minutes and there was only four stages and 46 stage miles remaining. He had also moved up to 13th overall by the end of Leg 2.

Matt had tested Pirelli slick tyres during Friday morning’s shakedown stage, even though conditions were wet at the time. But now with the roads drying and no rain forecast for the final night time leg, the data he’d gained 36 hours earlier gave him the confidence to use those tyres on the final loop.

On the opening stage of the final leg, Matt set a new record over Calgary Bay/Loch Tuath, which at 21.89 miles was the longest stage of the rally, by stopping the clocks 38.6secs faster than rally leaders and eventual overall winners Daniel Harper/Chris Campbell (Mini WRC). That truly incredible drive saw Matt leap up to eighth overall and third in the BRC.

After two more relatively short but very tricky stages, Matt was sixth overall and second in the BRC.

One more overall fastest time on the final stage – Matt’s ninth in 17 stages – saw him move up to a final position of fifth overall. More importantly, he’d gone from last to second in the BRC to keep his third straight title hopes very much alive.

“It’s almost even more special to get the result we have on Mull after what happened on the opening stage and to have picked myself up and fought back in the way we have. I think I’ve learned a lot about myself this weekend,” said

“I never give up. Never. But to tie the suspension together with the spare wheel strap and get out of the first two stages with no brakes and then perform in the way we did for the remainder of the rally highlights more than anything how much I want to win the British Rally Championship title again this year.

“I’ve been driving as fast as I could with the knowledge that I have of the Mull stages. Coming here for the first time is a big challenge and every time you drive a section of road you get to know it a little bit better. It’s very difficult to drive these roads at speed because they are so fast and technical and within every mile there is something trying to catch you out. But I’ve been committed to the pace notes and Darren’s done a great job – as has the Melvyn Evans Motorsport team. 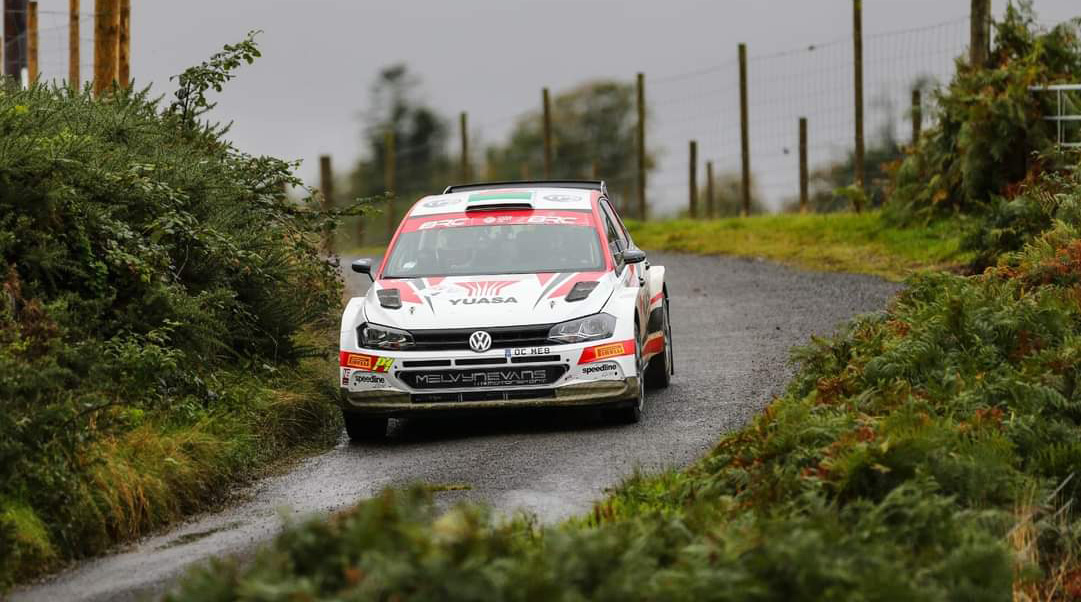 “Despite our early drama and it being a long rally with two very tough night time sections I could keep going. I was enjoying driving the Polo so much and loving the challenge of the Mull roads that I’d have happily kept driving for another hundred and fifty stage miles!

“There are a lot of people behind the scenes who make this project happen and I just couldn’t let them down after my early mistake. I don’t do things like getting a corner so wrong and I’m proud that I was able to put it behind me and come straight back out fighting. And coming from 143rd to fifth overall, and from last to second in the BRC, isn’t too bad really, is it?!”

The next round of the British Rally Championship is Matt’s home round of the series, the Visit Conwy Cambrian Rally on Saturday 30 October.