We are giving you extra value for this issue, with four contributors for the price of one! Our fantastic four are based at TPS Warrington and while the quartet have different roles at the Centre, they are united by one common interest – their love of the Mk5 Golf. 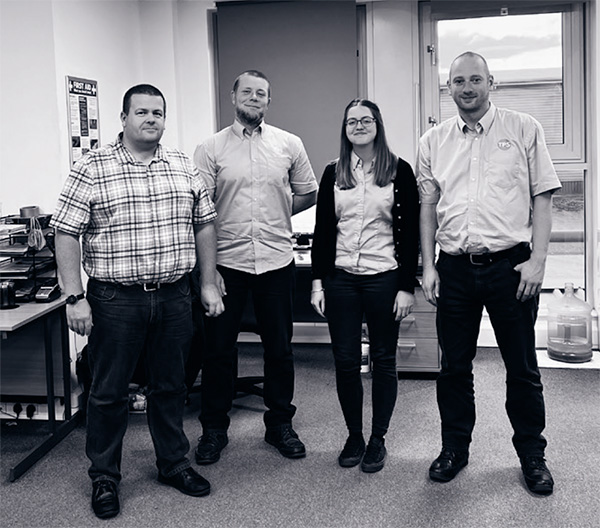 The Volkswagen Golf has a long and illustrious history, what with its iconic status in the pantheon of Volkswagen Group greats, well-established through seven generations of the original ‘hot hatch’ in Issue 2.

We told the story of how it all began back in 1974 with the Mk1 and Mk2 models – the trailblazers that helped shape an icon.

This time we move the Golf’s story forward 30 years, with the Mk5 version taking centre stage. Built in Wolfsburg, the Mk5 made its debut at the Frankfurt Motor Show in October 2003 and went on sale in Europe the following year. With the Mk3 and Mk4 versions poorly received at the time, the pressure was on for the Mk5 to retrieve the Golf’s reputation and it duly delivered.

Upon launch, the Golf Mk5 range initially consisted of 1.4, 1.6 and 2.0-litre versions featuring the petrol driven Fuel Stratified Injection (FSI) system and a standard 1.4 litre petrol version. Soon after, came the GTI version, the badge that has come to symbolise the hot hatch.

The first Mk5 GTI production model was initially unveiled at the Mondial de l’Automobile in Paris in September 2004. First impressions were positive, with expectations that the new Mk5 would bring back the glory days of the Mk1 and Mk2 models.

The Mk5 GTI had been given a 197 horsepower (147 kW) 2.0-litre turbocharged inline 4-cylinder engine that massively boosted performance over the Mk4 model. With this new engine the Mk5 Golf GTI could hit 100 km/h (62 mph) in 7.2 seconds in manual trim, or 6.9 seconds if the innovative DSG transmission option was selected. It was a massive gain over the previous generation model and put the Golf GTI back on top of the performance hatchback market.

As our contributor Paul Bridge observes, it is the car that put the smile back on the face of the GTI enthusiast.

Paul, who is the proud owner of a black, 2006 plate GTI Mk5, says: “The Mk5 GTI is just so much fun to drive. It just makes you smile every time you get behind the wheel. It’s got that good mix of an old school look and feel, from the shape to the interior, with new technology that really delivers on performance.”

While the Mk5 GTI helped turbo boost the Golf back onto the hot hatch podium, it doesn’t top the range. That honour goes to the R32.

Launched in September 2005, the Mk5 R32 went on sale in the UK a couple of months later. It featured an updated 3.2-litre VR6 engine fitted to the previous Mk4 version, with 155mph top speed and going from 0-60 in 6.5 seconds, reduced to 6.2 seconds when using the Direct-Shift-Gearbox (DSG) system.

The power packed performance is just one of the R32’s many qualities that makes it such a favourite, with our contributor, TPS Centre Manager Andy Mann.

Andy, who is the proud owner of a silver, 2007 plate Mk5 R32, said: “It’s the engine, it’s the body shape, the DSG gearbox, it’s everything about it that makes it such a great car.

“If I was asked to name one thing about it, it’s the engine. I am a massive lover of the VR6 engine, which really helps make it such a great car to drive. I would say to anybody who has never driven one, you need to drive one, as only then will you realise how incredible they are.”

The Mk5 is indeed an incredible car and as well as the GTI and R32 models, it also boasted some special editions that crowned its glorious return to form.

This included the 30th anniversary edition model launched at the end of 2006, the fastest Golf GTI model produced to date. At its heart was the same 2.0-litre four-cylinder turbocharged engine, but with a few tweaks that boosted power to an impressive 227 hp.

It was equipped with special 18-inch ‘Pescara’ alloy wheels to complete the sporty look. On the inside it featured unique sport seats finished in ‘Interlagos’ cloth trim and a sculpted leather GTI steering wheel with red leather stitching.

The 30th anniversary edition also marked the return of the distinctive golf ball shifter gear knob, an original Golf GTI design favourite. With a limited production run only 1,500 of them made their way to the UK, making them more sought after than the standard Mk5 Golf GTI.

Since its 1974 launch, the Volkswagen Golf in all its forms has achieved over 30 million global sales, making it one of the most successful vehicles in Volkswagen Group’s history. The Mk5 has made a significant contribution to that illustrious lineage, helping return the Golf to its glory days at a time when its icon status was beginning to fade.

It’s helped make the Mk5 as loved by enthusiasts such as our four contributors – read more of their thoughts in our Inside blog – as the arguably more famed Mk1 and Mk2 versions. As our contributors say the Mk5 is a fun car, a reliable car and a performance car. Most of all, it’s an iconic car and one that is truly deserving of its status.